I Am a Fugitive from a Chain Gang 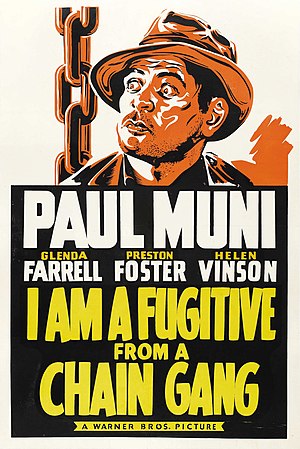 I Am a Fugitive from a Chain Gang is a 1932 American pre-Code crime-drama film directed by Mervyn LeRoy and starring Paul Muni as a wrongfully convicted convict on a chain gang who escapes to Chicago. It was released on November 10, 1932. The film received positive reviews and three Academy Award nominations.

The film was written by Howard J. Green and Brown Holmes from Robert Elliott Burns's autobiography of a similar name I Am a Fugitive from a Georgia Chain Gang! originally serialized in the True Detective magazine.


Retrieved from "https://greatestmovies.miraheze.org/w/index.php?title=I_Am_a_Fugitive_from_a_Chain_Gang&oldid=60091"
Categories:
Cookies help us deliver our services. By using our services, you agree to our use of cookies.